In 2004 after so many years of radio hobby (since mid ’70), I going for my first HAM examination.I get my XYL also with me, try to take both a HAM licence and with a happy ending.My first call was ON2DSP later change to ON3DSP. My XYL first used ON2DMT later change to ON3DMT and since 2011 back ON2DMT. Since May 10,2006 I passed the A-licence, so the novice callsign ON2DSP,ON3DSP is change to ON7DS.

On regular times I used also my second call OT1D, most of the time on shortwave. We running our radiostation from the village of Kontich.This QTH, situated at approx.10 km S/E from the port and the historical city of Antwerp. We only QSL via de bureau (only e-QSL when you have no QSL bureau). SWL reports are always welcome, Im shortwave and HAM listener since the mid seventees and also a member of DX-Antwerp for many years ! 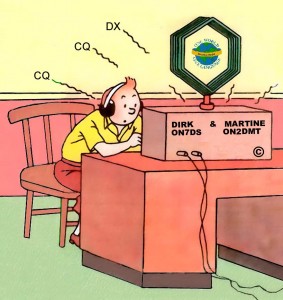 Above you can see a picture of Tintin (in dutch:Kuifje),created around 1929 by the Belgian Herg. Who is Tintin? Tintin started as a reporter of the Brussel journal le Petit Vingtime, at the end of the early 20s. The young artist Herg, the maker of Tintin, has always been a little jalous on his creature. He himself dreamt always about becoming a big reporter and journalist. Tintin is a reporter who dont write anything down you tell him,instead of that he alwasy went out for a investigation himselfs and he was never scared from anybody. Tintins first tripwas to the Sovjet-Union. In the next adventures he went to Congo ( This was at that time a part of Belgium ),and to America. Tintin sat never still, this can we see in his next adventures. In chronological order he comes in Arabia, Central-America, South-America,South-America, in China,in Tibet and even twice on the moon, look at Destination moon and Explorers on the moon. As often Tintin travles, so less he is typing on his typewriter.Sometimes he runs with a camera but never we read an spectacular article or interview. Tintin as a reporter seems like a fake, but a good fake. This because nowadays millions of people are still crazy about Tintin. Here you can see thedifferent languages: